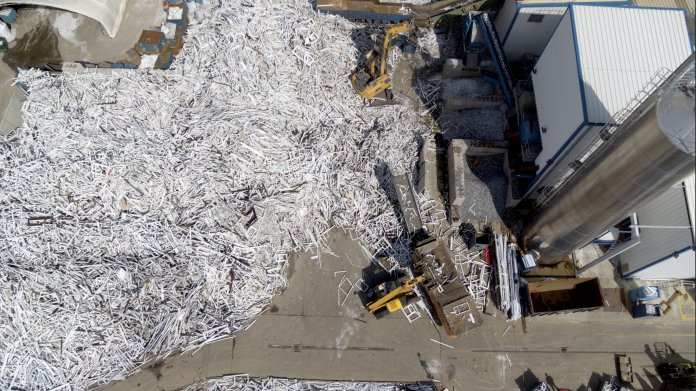 In the space of two weeks VEKA Recycling Ltd has been chosen as a finalist at this year’s G Awards, the second major business awards in a fortnight to recognise the specialist recycler of end-of-life PVC-U windows. The company has been selected as a finalist in the Best Sustainability Initiative category of the G Awards, the finals of which take place in November, in recognition of the completion of the firm’s £15 million state-of-the-art Wellingborough, Northamptonshire recycling facility. This adds to the company reaching the finals just a few days ago, of the National Recycling Awards, in the Recycling Facility of the Year section.

“This is very exciting news,” said VEKA Recycling’s Managing Director Simon Scholes, who has managed the project from conception to its completion after a two-year build, in December 2020. “Our team has worked incredibly hard to bring this complex project to completion, especially with the challenges posed by Covid-19. But we did it, and we are delighted that we have reached the finals of these two awards.”

The VEKA Recycling facility is said to be the most advanced of its type in Europe, combining the latest technology to produce recycled PVC-U pellet of consistently high quality that rivals virgin material. Used extensively for the manufacture of products for the electrical and construction industries, the pellet produced by VEKA Recycling at the Wellingborough plant, is increasingly used for the extrusion of new window and door profiles.

Simon also congratulated its sister company within the VEKA Group, the Burnley-based systems company VEKA PLC, for also reaching the G Awards, including one in the Best Sustainability Initiative category: “Whilst we are run as separate businesses, the ethos of the VEKA Group runs throughout all of our companies. The Awards evening will be an exciting one, that’s for sure!”