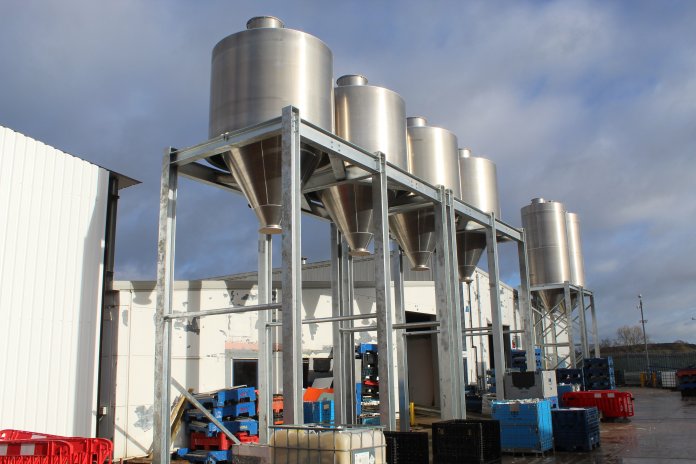 VEKA Recycling has invested £150k in six new silos to increase storage capacity at its state-of-the-art Wellingborough recycling plant, the most advanced of its kind in Europe.

The extra space created by the installation of the two 20m3 and four 10m3 silos, completed in January 2021, will increase efficiency by reducing the manual handling of product via forklift. This will greatly improve the flow of materials around the pioneering site, which is now fully operational following the completion of a phased, £15 million investment programme spanning three years.

Simon Scholes, Managing Director at VEKA Recycling, said: “This latest investment in six new silos not only increases our storage capacity in order to streamline our own operations but further illustrates the commitment of our organisation to increase the capacity for PVC-U recycling in the UK.

“We have obtained planning permission for additional 20m3 silos at the plant, if and when required and, although installation is not imminent, there is plenty of future capacity available should VEKA Recycling decide to construct these later down the line.”

The six new silos join an existing 130-tonne capacity silo installed by VEKA Recycling, in late 2019, to hold a significant proportion of the old window frames delivered to site prior to processing. Ultimately, the new silos will enable the organisation to recycle even greater amounts of waste PVC-U product in order to achieve its objective to keep as many end-of-life PVC-U windows and doors out of landfill as possible.

Simon Scholes added: “The recyclability of PVC-U is becoming a major selling point, as organisations – along with consumers – become increasingly aware of the impact of post-consumer waste on the environment. At VEKA Recycling we are absolutely determined to reduce this impact and our ongoing investment in our Wellingborough plant, which is the most advanced in Europe – and possibly the world, demonstrates that.

“Having cost around £15 million and taken three years to complete, the plant is now fully operational and the unwavering commitment to the project from our German, family-owned parent company, despite the UK leaving the EU and the challenges posed by the coronavirus pandemic, would suggest the future for PVC-U recycling is very bright indeed.”