Home Charity TURFED OUT IN THE COLD… AND THOUSANDS RAISED FOR CHARITY – VEKA... 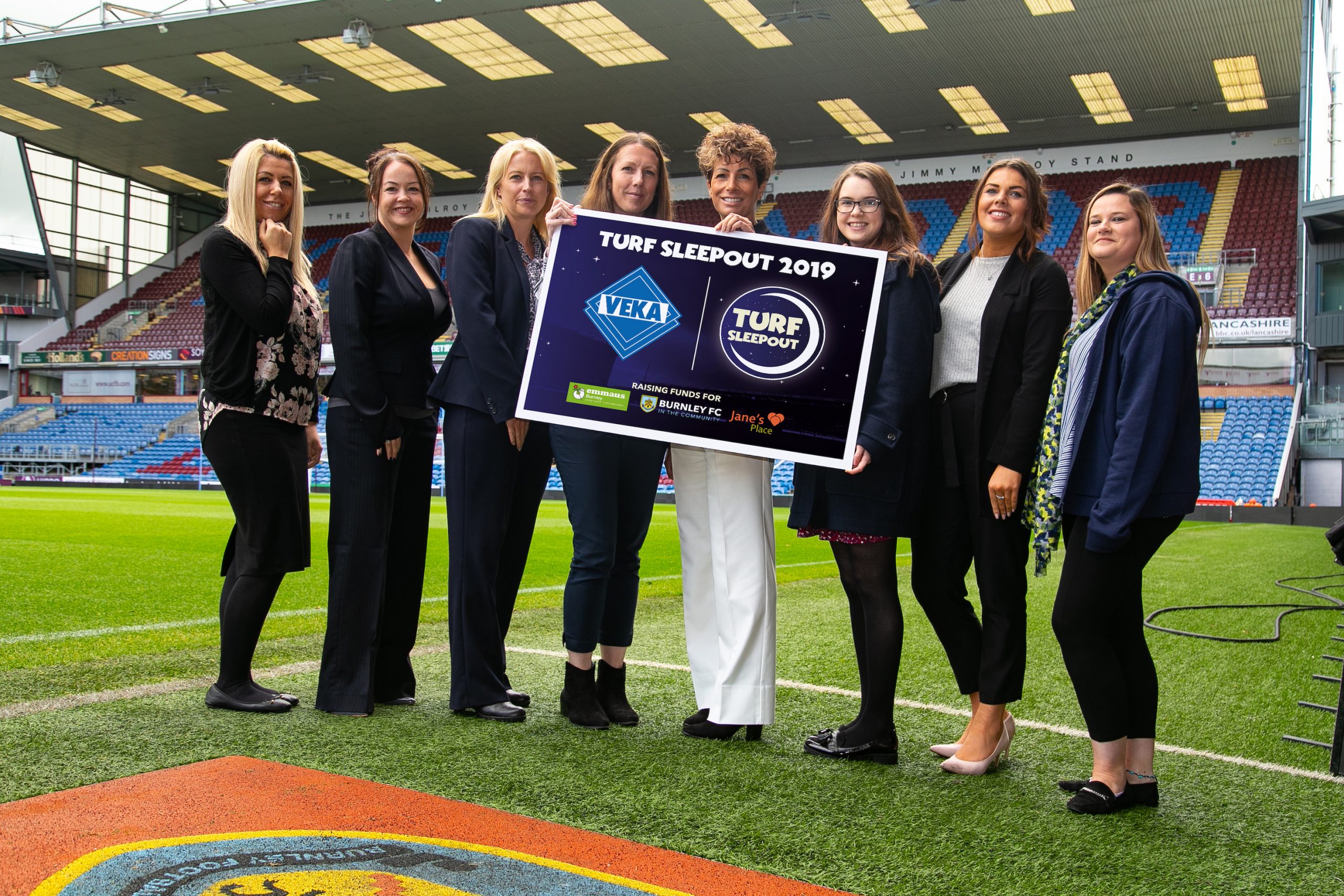 Fundraisers braved the low temperatures on November 15th to sleep pitchside at the Burnley FC Ground for the benefit of Burnley FC in the Community, Emmaus Burnley, and SafeNet Domestic Abuse Service for Jane’s Place Women’s Refuge.

The VEKA team were thrilled to beat their fundraising target of £2,500, drumming up an impressive £3,320 (and counting).

This is the second consecutive year that VEKA UK Marketing Director Dawn Stockell has taken part, saying: “Last year, around 50 people joined in the first Turf Sleepout which occurred during Storm Callum. This year was slightly drier, but we definitely needed to wrap up in our warmest coats! 65 people spent the night pitchside to raise funds to tackle homelessness, and together we raised over £25,000.

“What can I say – it was cold and uncomfortable! But that’s precisely the point, isn’t it? We were sponsored to do this for just one night, and it’s heartbreaking to think that people go through this every day. The homelessness statistics across the UK are extremely alarming, and the North West is no exception. That’s why my colleagues and I were proud to come together and do our part to help three fantastic charities in the valuable work they do to combat this situation.

“VEKA also partnered with Burnley FC in the Community last year, supplying the windows needed for the new Burnley Community Kitchen and Foodbank. This is a cause we are proud to continue to support in its efforts to tackle a host of all-too familiar problems such as poverty, hunger and lack of understanding when it comes to diet and nutrition.

“As well running the food bank, the 2018/19 season saw Burnley FC in the Community support refugees, veterans, young carers, people living with disabilities, young offenders and children experiencing tough times with their mental health. They engaged with over 33,000 individuals and invested £3,599,807 into communities over the last year.

“VEKA UK is Burnley-based manufacturer that employs more than 380 people, who are all encouraged to get involved in helping the community. The ethos is one of family values and supporting others – both at and outside of work. As well as supporting a yearly chosen charity, each of our Directors also has their own dedicated CSR responsibility. Sales Director Neil Evans has committed the last year to specifically supporting Burnley FC in the Community which has included being involved in the Sleepout last year, as well as running numerous sessions and workshops with various employability groups aimed at helping people get into work.

“Emmaus Burnley supports hundreds who have experienced homelessness, with funds helping individuals to go out on trips, enjoy activities and purchase basic needs including toiletries.

“Meanwhile, SafeNet Domestic Abuse Service supports many young people living with the charity in safe refuge. Funds help provide 1:1 therapeutic sessions, small group work, crèches and trips out to help children recover from their experiences of living with domestic abuse. Support for this organisation is vital, as they currently only have enough facilities for around 1 in 9 referrals.

“I was delighted with the incredible support we received for this year’s Turf Sleepout. We were joined by a fantastic number of fundraisers on the evening, even more than last year, and there was a real community spirit and camaraderie on the evening.”

To find out more about the charities involved, or to donate – visit justgiving.com and search ‘Turf Sleepout 2019.’ Visit www.veka.co.uk to learn more about Lancashire’s ‘Red Rose Manufacturing Business of the Year 2019.’