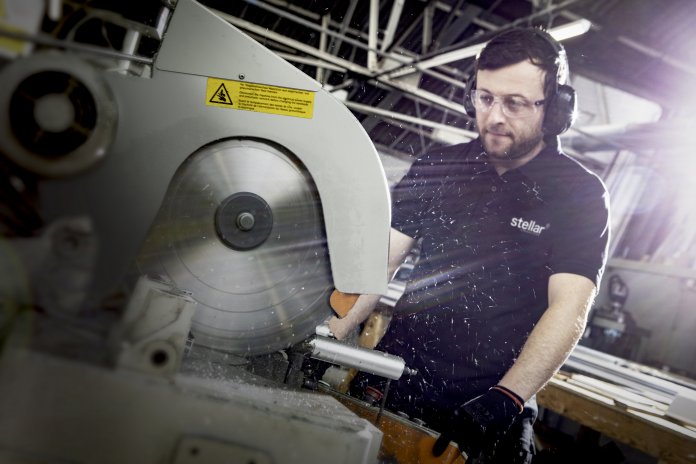 Stellar, the multi award-winning aluminium system from Epwin Window Systems is proving popular with customers due to the system’s intelligent design innovations.   Phil Parry, Business Development Director at Epwin Window Systems, explains: “Stellar was designed from the ground up with a remit to be simple to fabricate and easy to install. As a result, it’s packed with unique and patented features that really make a difference to the fabrication and installation experience.”

The system’s patented Reverse Butt Joint means windows can be internally glazed without the need for dummy sashes. This is appealing to fabricators as Deborah Beeley, Sales and Marketing Manager at Kingfisher Windows, says: “We value the innovative Reverse Butt Joint on Stellar – it means no dummy sashes or reverse adaptor profiles are needed, which uses approximately 30% less aluminium and minimises waste. It also increases the glazed area, which adds even more to the products’ aesthetics.”

The unique flush aesthetics of Stellar are a stand-out feature that fabricators appreciate. Peter Adams, General Manager at Capital Windows said: “What stood out for us is other systems on the market use ‘plant ons’ or adaptors to achieve flush aesthetics which is a popular trend in window design. But Stellar was designed from scratch as a true flush system and along with its slim sightlines and the benefit of its knock-in beads, normally only seen on PVC-U windows, it’s a very appealing system for our customers.”

Stellar is a pre-gasketed aluminium system, which rapidly speeds up the installation process. Liam Duffy, Director at Bifold Local, comments: “The pre-inserted gaskets don’t overstretch, which adds to the overall high-end aesthetics but also eliminates call backs to site.”

Not only is Stellar straightforward to fabricate and install, it also delivers the high-end contemporary aesthetics that allows installers to tap into higher-value projects. Adam Page, Owner of Devon and Cornwall Windows said: “We chose to manufacture Stellar because of its clear benefits. Homeowners appreciate its superior slimline flush profile and its high-end aesthetics allow us to tap into higher-value projects.”

Since the system was launched, Stellar has attracted many plaudits and has become the next generation in aluminium system design. David Green, Managing Director of BDC Aluminium, concludes: “From the start, we knew that Stellar offered the industry something ground-breaking and it would seem our customers agree. We have seen a huge upturn in demand for Stellar as our trade customers appreciate what the products deliver.”

As these comments show, it’s clear that Stellar ticks all the boxes. It’s quick and easy to fabricate, it’s straightforward to install and has superb consumer appeal.  In short, Stellar is living up to its name.