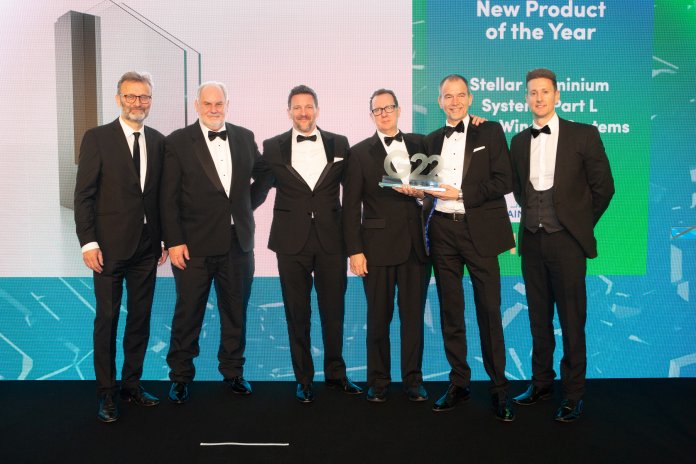 Epwin Window Systems has won New Product of the Year at the prestigious G22 Awards for its Stellar Aluminium window and door system (Part L). The newly designed aluminium window and door system won for its developments to future-proof the system for the new Part L of Building Regulations as well as the more stringent regulations that will come into force over the coming years as the government continues its push towards net zero.

Clare Bailey, Managing Director at Epwin Window Systems said the award reflects the dedication and design excellence of the in-house product development and technical teams. “The strength of Stellar’s design is reflected in this award. One of the defining factors in the development of the original Stellar system was a refusal to compromise in search of excellence. It is a commitment that is still in evidence in the development of the new Stellar window and door system. It’s fantastic to see the efforts of the talented Epwin Window Systems’ teams recognised in this award. We are thrilled.”

The original Stellar aluminium system was launched in 2019. It took the market by storm and was acclaimed by fabricators and installers as setting a new benchmark for a retail aluminium system thanks to the system’s unique flush aesthetics and multiple patented design features.

As a business whose commitment to product excellence is front and centre, in March 2021, the development team made the bold decision to evaluate the system and consider where and how it could be made even better.  Clare said: “The new Stellar aluminium system demonstrates a level of ingenuity and innovation that the fenestration industry can take pride in. There are few systems that are so comprehensively re-evaluated at any point in their lifespan, let alone just two years in. It reflects a desire to blaze a trail in the industry and set new standards for technical benefits and aesthetic advantages to give our customers a competitive edge.”

The original Stellar system took a ground-up approach to its design, questioning every element of traditional aluminium window construction and looking for ways to improve it. Such refusal to compromise is an impressive commitment and one in evidence in the new Stellar aluminium window and door system, qualities that impressed the G22 Awards judges who described this product as “innovative and forward thinking”. They commented “with 95% recycled aluminium, slim sightlines, reverse butt joint, and with compliance with current and possible future regulations, this really gives installers a viable option in a competitive market.”

The award was announced by actor, comedian and writer Hugh Dennis on 25 November at a Gala Dinner and Award ceremony at the InterContinental London Park Lane in London.

Clare concluded: “The G Awards are always a very special event and an opportunity to celebrate excellence in the industry. We are delighted to have won this award for Stellar.”