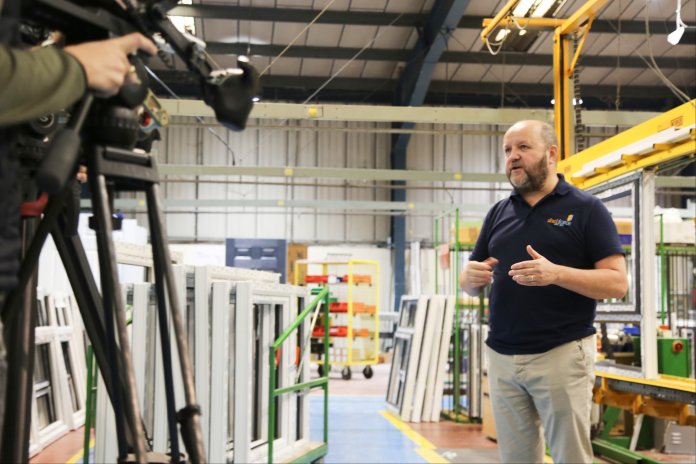 Shelforce did the fenestration industry proud on national television, as viewers of ITV’s Made In Britain got to see how sustainable windows are produced.

The Birmingham-based window and door manufacturer was chosen by the producers of the show to demonstrate the process – and tell the company’s unique story.

Shelforce, who specialise in providing high-quality PVCu and aluminium products to local authority building projects, including Birmingham City Council, employs some of the city’s most vulnerable people, with 75% of its workforce disabled.

And the great job the team do was at the heart of the feature on the popular show, which tells the story of British production and some of the country’s best loved products.

Narrated by Geordie actor Tim Healy, the TV spot told how Shelforce dated back to 1839 as part of the Royal School for the Blind and how, despite making windows and doors for more than 30 years, the company has managed to maintain its fully inclusive legacy.

Howard Trotter, Shelforce’s Business Manager, who was interviewed for the show when camera crews came down to the company’s factory in Erdington last year, was delighted with finished product.

“The producers really captured what we’re all about and the spirit within our team, but it was also important that they showed how professional we are,” said Howard.

“We produce thousands of windows and doors a month here and one of the points made clear to everyone here is that we must compete with the open marketplace.

“These are engineered products we are producing every day and the team are highly skilled and hugely experienced, so disability doesn’t come into that, it’s all about the ability needed to make windows and doors.”

As well as speaking to Howard on camera, some of the wider team were also interviewed for the feature thanks to a signer that was brought in, and Howard said that the attention on the whole team was extra special.

“It was a great opportunity to put Shelforce and what we do out there, but it was especially fantastic for the team to get the recognition they deserve for all their hard work. It’s because of them and the standards they set that we can do what we do.

“They enjoyed being a part of it and have taken being TV stars in their stride, as they do with everything else.”

As this series was also focussing on the environment, film crews also took a visit to Shelforce’s supply partner Eurocell to look at its commitment to PVCu recycling and providing energy efficient, sustainable products. Eurocell take in around 3,500 tonnes of used window frames a month, keeping it from going into landfill, and over the course of a year recycled 3 and a half million frames.

Film crews also stopped in at Midlands glass manufacturer Kelsi Group, who go through around 300 tonnes of glass per month, to show how the glass is trimmed to size, toughened ready for use, and put together.

And Howard was delighted that the whole process was on display for viewers to see.

“The industry has a certain perception in the general public’s eyes and can sometimes take a bit of a hammering. Even some of the lads on the crew mentioned White Gold when they were here,” added Howard.

“But I think both ourselves, Eurocell and Kelsi showed that that image is not the case, and it shined a positive light on our industry. We were delighted to fly the flag.

“And while not everyone will be interested in welded joints, spacer bars and argon gas, these are engineered products; they keep us warm in the winter, fire doors protect and keep us safe, and I think the programme provided a good insight into how these products are made and the processes they have to go through before they come out of the factory.”