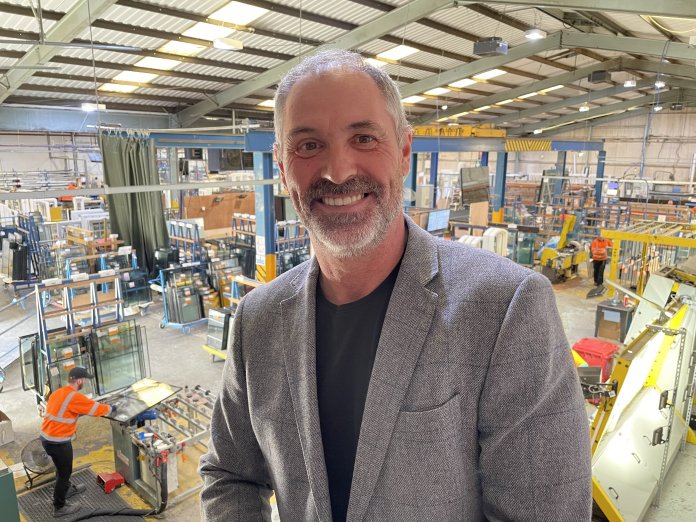 Taking the opportunity to book a last minute stand at this year’s FIT Show, which took place last week;  Quickslide’s Chairman Adrian Barraclough declared: “We’re not here to sell windows, we’re here to make sure you can”. With the Brighouse, Yorkshire window fabricator signing up to take space at the first FIT Show since 2019 just 10 days before the event opened, Adrian’s stance reflects six months of his social media activity during which he has posted videos recording his intensive tour of Quickslide customers.

He says: “We wanted to take advantage of so many people being together at the same time, under the same roof…I have thoroughly enjoyed getting out to see customers and potential customers since we were able to interact with people again.”

The stand featured a tall structure to act as a beacon to the company’s existing customers and those interested in talking about Quickslide’s most comprehensive range of windows and doors ever, in aluminium and PVC-U. And especially the firm’s market leading range of VS windows, with which Quickslide is synonymous: “this was about talking, meeting people, and discussing how we can grow together, with three fantastic meeting spaces where visitors could relax.”

Underpinning Quickslide’s aim to support the success of their Trade Partners, there was also  displays showing Quickslide’s latest addition to its marketing and showroom support package, the latter of which allowed visitors to enjoy the experience just as homeowners would: “There is nothing like face-to-face at every level of the supply chain,” said Adrian. “And the FIT Show allows that, for thousands of the industry’s installers, fabricators, and suppliers to get together. And after the strains and limitations of the past two years, it really was the perfect opportunity to put that behind us and get down to business.”