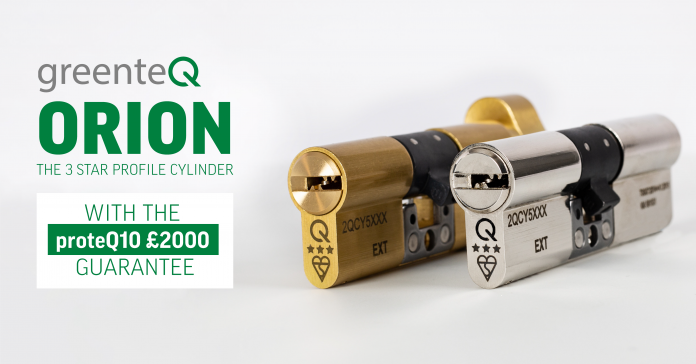 Hardware specialist VBH (GB) has reported a continued increase in take up of its proteQ10 profile cylinder guarantee.

If the Orion cylinder is snapped in situ, allowing the door to be opened unlawfully, VBH will pay the resident £2000 direct in compensation, according to the terms of the guarantee.

Orion was launched early in 2021 and has proven to be very popular among manufacturers of all kinds of doors, from residential doors through to bi-folds and sliders.

VBH advise that the guarantee is also proving to be a hit with consumers as the numbers of cylinders registered under the scheme in the combined months of April and May were 25% up on the previous two months.

Gary Gleeson of VBH says, “We get nothing but positive feedback on Orion both from industry professionals and from consumers. End users really appreciate the fact that their locks are guaranteed to the tune of £2000, and the fact that the operation of Orion is guaranteed for 10 years.

“As consumers, we are all very switched on to all aspects of a potential purchase, and many door buyers are making the simple choice of opting for the installer who is offering proteQ10, over those who don’t.”

VBH has recently introduced a bespoke key alike service to allow Orion cylinders of different finishes and sizes to be operated with the same key.

Further information on greenteQ Orion and VBH’s other products can be found at www.vbhgb.com, by emailing sales@vbhgb.com or by calling 01634 263263