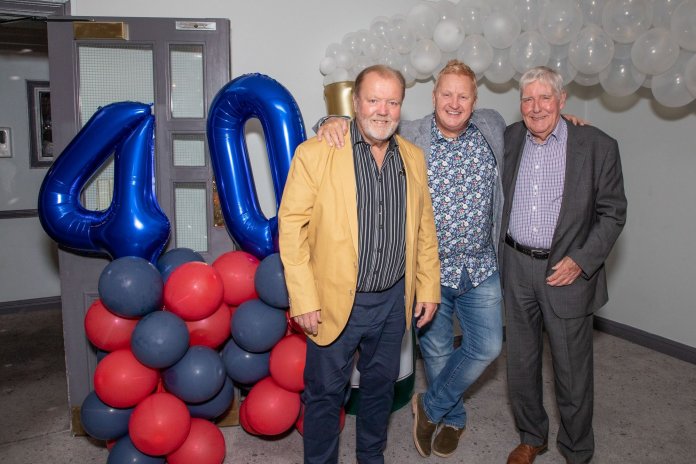 Over 150 people joined the celebrations at an event to mark the 40th birthday of thriving Midlands fabricator Central Window Systems.

Held at The Village Hotel in Derby, the party was a chance for the respected firm to thank its employees, and recognise the hard work and dedication that’s gone into building one of Britain’s most trusted and leading window and door suppliers.

The guests of honour were John Allen and John Bicknell – the men who founded Reliant Products Limited, the company that would become Central Window Systems, back in 1982.

A number of long-standing team members received Outstanding Achievement Awards and gifts to mark their service, including some that have been with the business for over 25 years.

The event included an array of delicious food, and entertainment courtesy of a DJ and a magician, meaning a great night was had by all.

“I’m delighted we were able to celebrate forty years of Central with the people whose knowledge, passion and skill made it all possible,” comments CEO Gary Morton.

“It was also a fantastic opportunity to recognise our long-serving team members, who’ve had such a huge positive impact on our business, and thank them for their service.

“I had a brilliant evening, and I hope that everyone else who attended did too.”

Founded as Reliant Products Limited (RPL) in 1982, the company was acquired by local fabricator Central CRC in 2011. The resulting business was then acquired by the Boing Boing Group in 2015.

In early 2022, Martyn Elwell, Sales and Marketing Director and Kristie Hughes, Group Finance Director, acquired a stake in the business – a natural next step for the thriving business, given the instrumental role both have played in the company’s development.

Both will be key as Central seeks to achieve its ambitious plans for growth in the years ahead.

Today, Central Window Systems operates from a 52,000 square foot manufacturing facility in West Bromwich, where it makes thousands of quality window and door products every week.

Its extensive range features products from market-leading suppliers, such as the full suite of uPVC windows and doors from Deceuninck, a wide selection of outstanding aluminium products from AluK, as well as glass roofs, tiled roofs and roof lanterns. www.centralwindowsystems.co.uk