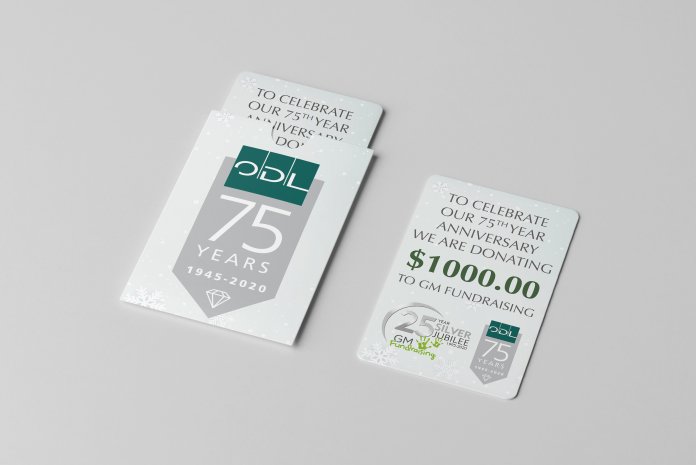 To help mark its 75th anniversary year, ODL Europe has donated $1,000 to GM Fundraising to support Hope House Children’s Hospices. Nathan Barr, Managing Director of ODL Europe, said: “We are delighted to make this donation to GM Fundraising to mark our 75th anniversary. Hope House Children’s Hospices is such an important cause because no one should have to face the death of a child on their own.”

Gary Morton, founder of GM Fundraising said: “We’re very grateful to ODL Europe for this donation. We’d like to thank the team for their generosity and, of course, congratulate them on their 75th anniversary milestone.”

The donation to GM Fundraising was part of a global initiative by ODL to make $1,000 donations to numerous charities to mark their 75th anniversary year.  As a result, over 75 charities worldwide have now benefited from the company’s donations.  Nathan said: “The 75th anniversary is a significant milestone for our parent company ODL but due to the pandemic, it isn’t the anniversary year the team had planned. It was always our intention to mark the occasion by helping various charities, and we’re delighted to help support Hope House Children’s Hospices at this time.”

Hope House Children’s Hospices provides specialist nursing care and support to children with life limiting conditions. They help their parents and families too, both throughout the lifetime of a child and often well beyond.

Since it was established in 1995, GM Fundraising has raised nearly £2 million for Hope House Children’s Hospices. Over 95% of Hope House’s £6.5 million annual operating costs are met through charitable donations and GM Fundraising is its largest single donor. GM Fundraising is celebrating its 25th anniversary this year and had hoped to raise over £200,000 for the charity, but the majority of its challenges and events had to be postponed due to pandemic.

Gary concludes: “Like all charities, Hope House has been hard hit by the pandemic. But donations such as ODL Europe’s remind us that companies still want to help people less fortunate than themselves and we thank them for their generous contribution.”