Home Charity Kick It With Keylite returns to raise mental health awareness within the... 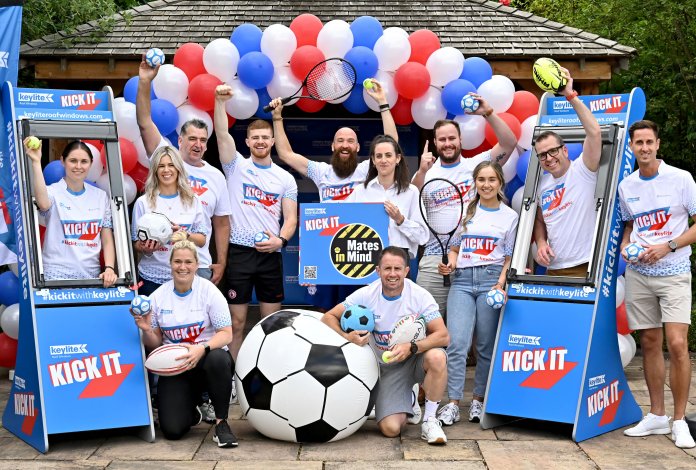 Following the success of last year’s initiative, Kick It With Keylite returns for 2022 – bigger and better than before.

This year, Keylite Roof Windows (Keylite) is challenging trades to ‘Keep It Up’ in the name of raising money for Mates in Mind, a leading charity addressing the stigma of poor mental health within the construction sector.

Mixing it up for 2022, Keylite is challenging merchants, installers and trades across the industry to record themselves doing as many keepie uppies as they can, share on social, donate to the charity and nominate a ‘mate in mind’ to get involved using the hashtag #KeepItUp.

No matter the chosen sport or ability – anyone can get involved! Join the likes of Welsh Rugby Union star, Shane Williams, Women’s Rugby World Cup winner, Rachael Burford, and GAA Football All-Star, Cathal McShane, in taking part in the challenge, all in the name of physical and mental wellbeing – raising much-needed funds for Mates in Mind at the same time.

Fiona Feeney, Support Manager at Mates in Mind, said: “The confronting human cost of mental ill-health cannot be ignored with suicide rates amongst construction workers more than three times higher than the national average, averaging at a shocking two deaths per day in the UK.”

Matthew King, Sales Director at Keylite, added: “Research shows that more than a third of construction workers live with severe levels of anxiety[1]. Although this is a very serious topic, and one that is personally very close to our hearts, we wanted to ensure that this year’s Kick It With Keylite brings fun and personality to trade counters – driving us to raise as much money and awareness for Mates in Mind as we can.

“Our message this year is to #KeepItUp, not only for the keepie uppie challenge, but also as a reminder to keep talking to each other, keep breaking the stigma, and keep being a mate – you never know who might need it.”

For upcoming Kick It With Keylite pop-up events at merchant branches across the UK, trades can keep an eye out on social media channels, or simply get involved with some mates on site.

Passionate about raising as much money as possible for Mates in Mind, Keylite is encouraging installers to make a donation via its JustGiving page www.justgiving.com/fundraising/kick-it-with-keylite and to start conversations around mental health amongst workmates.

For more information on Mates in Mind visit www.matesinmind.org.