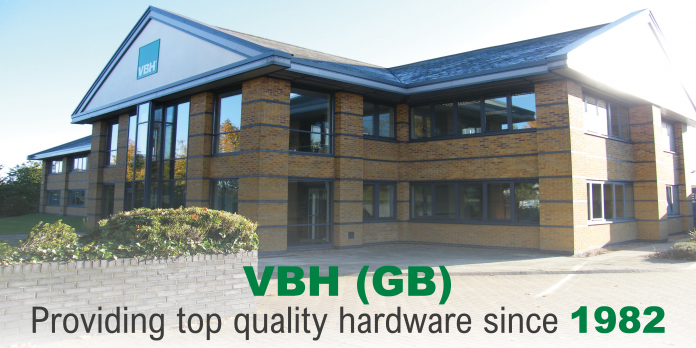 After originally supplying British fabricators direct from Germany, Peter Kinze, of VBH group company Heinz Wagner GmbH, persuaded the board that a local company was needed to capitalise fully on the riches that the fledgling UK market could bring.

The first product lines were mainly European and included brands such as CES, Gege, BSW, Hautau, Wehag, and Fuhr. Wagner even sold door panels for a while. Although many of the brands have disappeared from the range, some, such as Roto and Deventer, are still very much part of VBH’s product portfolio alongside the company’s own greenteQ brand.

None of the original staff members is still at VBH, but there are a number who joined soon after. These include Commercial Manager Robb Crampton, who joined in 1984, and the class of 1985, Lesley Mills and Lee Pollard.

2009 was a milestone year. Not only was there a name change, but the year also heralded the launch of the company’s own greenteQ brand of hardware and ancillaries. This marked the shift from VBH being ‘just’ a distributor of other people’s products to being a hardware manufacturer in their own right.

greenteQ has since grown hugely as the New product Development team has brought in a stream of exciting products dictated by the tastes and trends of the British market. greenteQ is now recognised as a top quality hardware brand, with products for windows, resi-doors, and patio doors, including the Clearspan bi-fold system.

The VBH team celebrated in style with a dinner/dance at Leeds Castle in Kent in May. Staff from all three UK sites got together to remember old colleagues and, in many cases, to meet new ones.