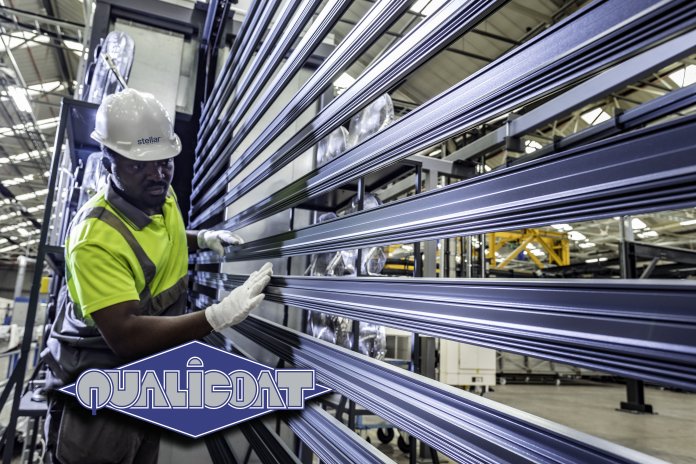 Epwin Window Systems has announced it has received its QUALICOAT licence, which means all its Stellar aluminium products are now QUALICOAT-approved. Martin Westwood, Production Manager at Epwin Window Systems, said: “We are delighted to become a QUALICOAT-licenced powder coat applicator. We have always adhered to the QUALICOAT specification because it ensures the high level of quality we deliver with Stellar, but having the official seal of approval was always very important.”

Angus Mackie, Chair of QUALICOAT UK and Ireland, commented: “We warmly welcome Epwin Window Systems into membership of the Association. Gaining a QUALICOAT license show a real commitment to powder coating to its highest quality and ensuring that the most up to date coating technology is followed.”

Fewer than 25 businesses are QUALICOAT-licenced, which reflects the demanding nature of the specification. It is more wide-ranging than BS EN 12206 (coating of aluminium and aluminium alloys for architectural purposes) and requires twice yearly, unannounced, third party accreditation visits. Martin commented: “I am very proud of the hard work our team puts in every day to ensure that we meet the exacting QUALICOAT requirements.”

The licence process took around 18 months to achieve and was delayed by the COVID pandemic. The first audit was pre-arranged with the final unannounced audit taking place in late September, after which the team found out they had passed. Martin said: “The QUALICOAT specification is often a requirement for commercial projects and it’s a specification that’s increasingly requested in the retail sector too which gives our customers a competitive edge.”

The license reflects the quality of the Stellar system that is evident at every level. As well as meeting the requirements of the QUALICOAT specification, every product is visually inspected at one metre, rather than the industry standard of three metres. Martin said: “Stellar was always designed to be second to none, which means there’s no room for compromise. Excellence comes as standard.”

Stellar has set a new benchmark for aluminium systems. It offers exceptionally slim sightlines and is unique in the industry for having a reverse butt joint that delivers true flush lines inside and out – and means it is as easy to fit as PVC-U. In achieving the QUALICOAT licence, it’s continuing to set itself apart as the aluminium window and door system of choice.