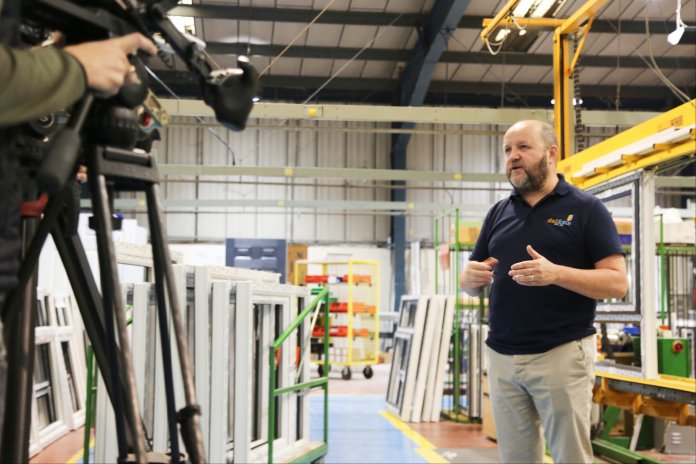 A Birmingham window and door manufacturer that employs some of the city’s most vulnerable people is set to appear on TV screens across the country next spring.

Shelforce welcomed camera crews from ITV4 to its Erdington-based factory for the channel’s new series of Made In Britain, which will be narrated by actor Ricky Tomlinson.

The much-loved show, which tells the story of British production and some of the country’s best-loved products, will consist of 10 episodes, with four different products featured in each. It will transmit on ITV4 in the UK and other broadcasters internationally.

Shelforce specialises in providing high-quality PVCu and aluminium products to local authority building projects, including Birmingham City Council, and 75% of its workforce is disabled.

A delighted Howard Trotter, Shelforce’s Business Manager, said: “It’s absolutely fantastic that the producers of Made in Britain have chosen to tell the Shelforce story. It’s a great opportunity for us to show what we do and provides the recognition the team deserves.”

The TV spot will focus on the production processes and interviews with some of the team on what Shelforce means to them.

“The team have taken the filming in their stride and haven’t let the cameras bother them,” added Howard. “The reason why ITV are here is because they’re brilliant at their jobs. For us, disability doesn’t come into it, it’s all about ability.”

Series Producer Rob Kelly explained Shelforce’s attraction: “Made In Britain is not just about the products, it’s about the stories behind them and the people. We were very keen to come to Shelforce because it’s got everything – great product, great factory, and great people.”