Home GGF A DAY TO REMEMBER FOR MITCHELL GLASS 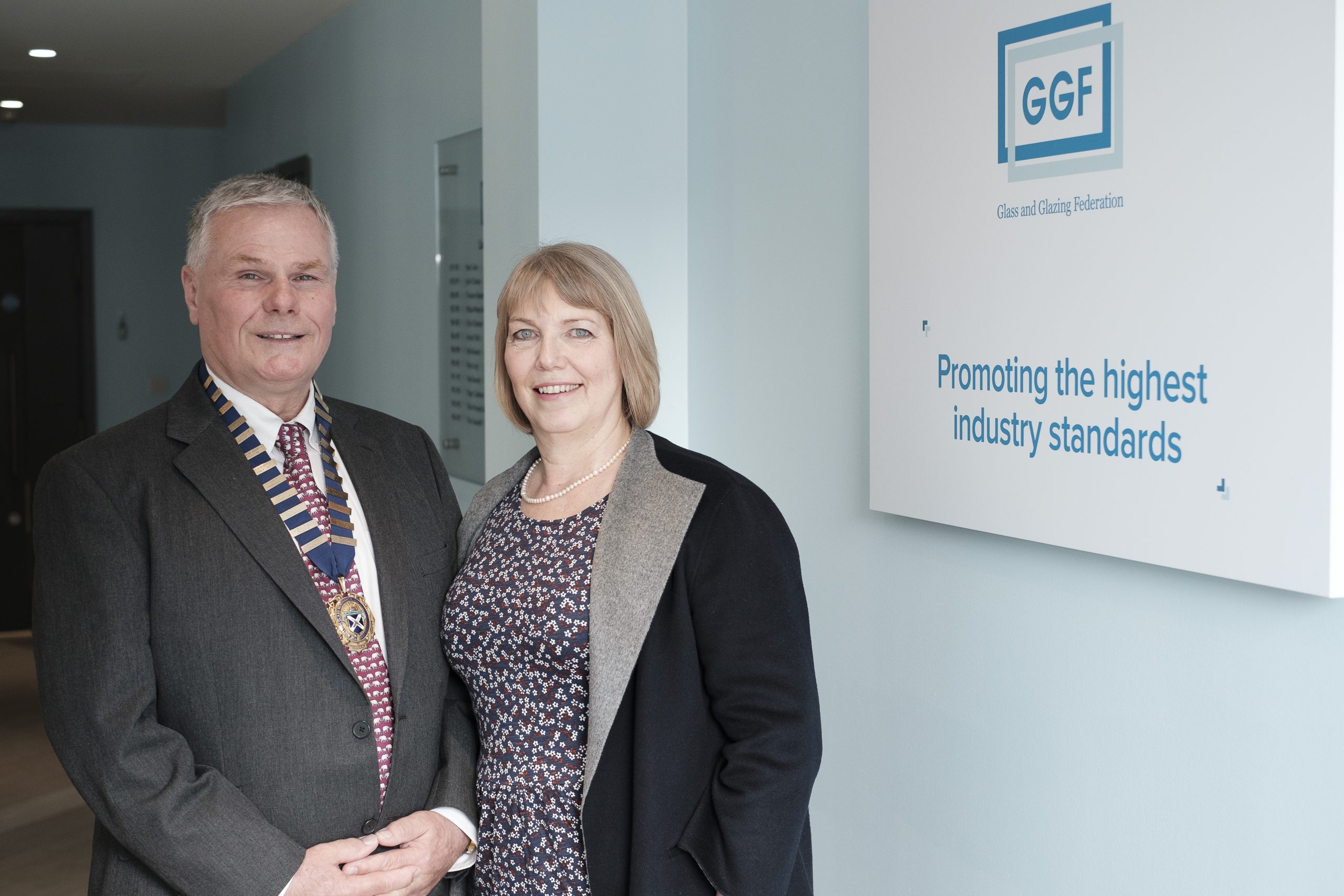 The 26th March was a day to remember for Peter and Susan Roden, owners of Mitchell Glass who were invited to the Glass and Glazing Federation (GGF) London offices for VIP treatment. First there was a guided tour of the GGF’s historic timeline of the glass and glazing industry, then a photo-shoot as they were re-acquainted with a special piece of Scottish glazing history and topped off with a special GGF award for “Outstanding Service to the Industry” at The President’s Reception held at St Bride Foundation Institute in the shadow of St Paul’s Cathedral.

On receiving the award, Peter said, “It’s been an amazing day. I am truly honoured and I’d like to thank the GGF and everyone for making it so special. It has been a great day for both Susan and I, not only receiving this award but also to be photographed at the GGF offices, wearing the 90 year old Scottish Glass Merchants and Suppliers Association President’s Chain of Office which was worn by Susan’s father when he was President of the Scottish Glass Association in 1992. That was a very humbling experience.”

Though surrounded by history in the heart of London, Mitchell Glass as Scotland’s oldest has its own unique and illustrious history going back almost 145 years.

In 1862, Robert Mitchell ran away from home in Kinross, Perthshire at the age of just 14 years old. Keen to see the world and make something of himself, he made it to Edinburgh, where he served his time as a Glazier and then a few years later moved to the Scottish Borders and set up his business R. Mitchell Glass in Hawick in 1875. At just 28 years old, Robert had founded his own company but surely he could never have imagined from its earliest days that it would become the longest established glazing business in Scotland.

Robert developed the business and proved not only to be a skilled glazier and successful businessman but he also helped shape the community around him. He built new premises in Hawick to accommodate the different elements of the company and in doing so increased employment in the area.

After nine years of building up a thriving local business, he turned his focus to local politics. In 1884, he raised his profile when he was elected as a Town Councillor. Three years later, in 1887 he was appointed a Baillie and in 1896, he started his four year tenure as Provost of Hawick.

As he approached retirement, Robert passed the business to his son Alex, who unfortunately died in 1948 and had no family to take over the business. The Board of Directors of Mitchell Glass decided to continue with the name Mitchell Glass that is still used to this day.

Current owner, Peter Roden started as an apprentice carding engineer and from successful completion and study, he worked in insurance and bookkeeping before starting in the glazing business as a sales manager for Mitchell Glass.

The family business theme remained with Peter persuading his wife, Susan, to join the team again. She had initially started her Mitchells’ career as a “Saturday girl” at the Market Street shop while still at school, when she typed invoices on ‘the big black typewriter’.

Both Susan and Peter have been active members of the GGF for over 25 years, with Peter being the first ever Chairman of GGF Scotland, which also included representing Scottish Members on the GGF General Council, a body that oversaw all the activities of the GGF.

Though it was a great and memorable occasion for Mitchell Glass, rather than bask in past glories, Susan and Peter are looking forward to the company’s future. Their son Lewis is currently learning all aspects of the business with a view to one day taking the reins of this prestigious brand name which holds a unique place in the history of glass and glazing industry.